Let it sink in; ALL-VEGAN, EVERYTHING! Vegan here and vegan there. Vegan, vegan everywhere! 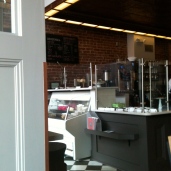 ecoRDN goes into a fit of reverie at the thought of plant-based options far and wide, and in the current climate of this great city, Pittsburgh, vegan food is thankfully not far but spanning wider everyday. And you do NOT need to be vegan or vegetarian to enjoy these new options, the dishes are thought out and so lovingly executed they stand up to their meaty competition.

B52 is new, though this is certainly not the first press the establishment has gotten. It opened in January 2016 to widespread arms and excited appetites, grabbing headlines of local magazines and newspapers as one of the 1st 100% vegan establishments in Pittsburgh (Randita’s was here already, but technically not Pittsburgh proper). B52 makes scratch-fusion (Middle Eastern/American), no-bullshit, punch-you-in-the-mouth food. The concept of Omar Abuhejleh, who also owns Allegro Hearth Bakery in Squirrel Hill, was inspired by his upbringing, his Mom’s cooking and travels through the Middle East. B52 is located at the corner of Butler and 52nd in Lawrenceville, hence the name, and so far the most exciting  plant-friendly cafe in the entire East End of Pittsburgh. B52 is that good.

Open for lunch and brunch, with dinner on the way (Update: B52 is NOW open for dinner as well), B52 currently opens its doors from 8-3 Tuesday through Friday and 9-3 Saturday and Sunday. Offering a variety of in-house desserts and specialty teas, kombucha, nitro cold brew coffee and specialty espresso drinks, B52 flexes fresh decor and clean lines throughout their 35 seat dining area.

ecoRDN began our meal with a seasonal special coffee drink and a classic cappuccino. The Cafe Rico is 2 shots of espresso with Tahitian vanilla beans, expressed orange oil, cinnamon and house-made almond milk – creamy and thick, one of the best dairy-free frothed coffee drinks we’ve tasted. Lush. Not too sugar sweet, instead naturally sweetened by the vanilla, cinnamon and orange. Balanced, with appropriate caffeine kick. A splendid aperitif. Filling but well worth it.

The Cappuccino, like the Cafe Rico, is one of the greatest dairy-free frothed drinks we’ve experienced, ever! Loads of body, a cushy merengue-like froth, sweet chewable air. (Mouth Feels ftw!) 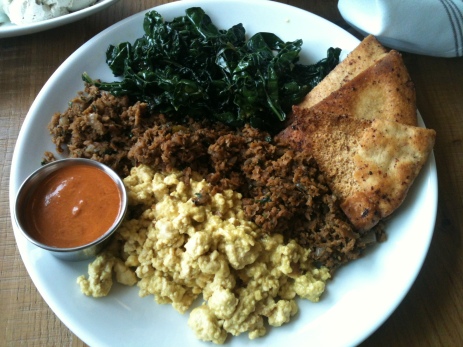 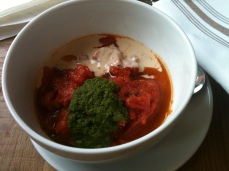 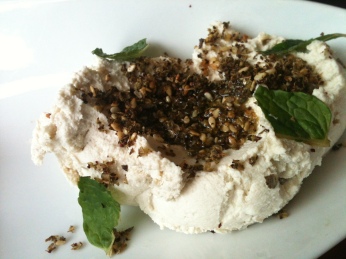 We decided on the Mezzo: Taste 3 (three sides with a basket of soft pita) and the Kofta Tofu Scramble.

Labneh – Fermented cashew, mint and za’atar. There are feta and goat qualities to this nut cheese but the taste is more yoghurt. Tangy and super smooth.

Fried Tomatoes – garlic, zhoug and tahini sauce. A stewed tomato consistency. Zhoug is a piquantly refreshing puree of parsley, cilantro, cumin, salt and green chiles. The tahini added a rich hit that mellowed nicely with the creaminess of the fried tomato.

Kofta Tofu Scramble – seitan kofta, spicy minced seitan. The tofu scramble was a low-key but unique take on the common vegan breakfast dish. This was more like a soft scramble, easter peep yellow, understated flavor. It was different but welcome! Served with a side of whole leaves of wilted kale and seasoned, crispy pita. A balanced plate built with love.

We really, really wanted to try dessert but our stomachs just could not do it. ecoRDN was almost relieved when the last cinnamon bun was sold and the decision to save dessert for another day became a little easier. But don’t worry friends B52 is within easy walking distance and cake will be had in the near future! That we can promise you. 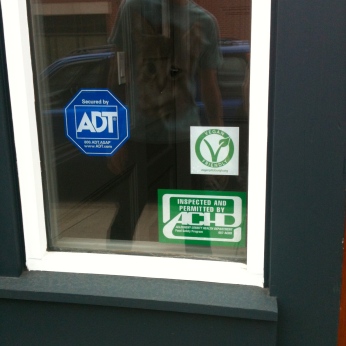