The past few weeks have been a whirlwind of activity (none of it blogging) as our followers may have noticed. ecoRDN picked up and moved back to our home city of Pittsburgh, PA after 3 1/2 years of big-apple living. It’s been bittersweet as we love both places equally, but differently. Let me discuss some of the New York highlights since our last post…

2. ecoRDN took a last hoorah Bronx exploration walk to the Hudson river with a scary return to Woodlawn Heights via Van Cortlandt Park after dark.

It started out as many other long-ass urban hikes have, cutting through the wooded paths of Van Cortlandt Park to soak up a tiny bit of nature, weaving our way through Riverdale, past Wavehill and down a very steep hill to get to the metro north station. Got some pics of the Hudson River and the New Jersey Palisades across the way and headed back up the very steep hill (which seemed steeper and longer going up, by the way).

Van Cortlandt Lake, the largest body of freshwater in the Bronx 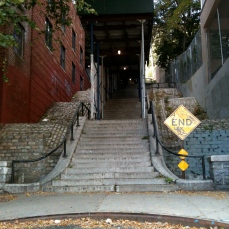 Step street: 238th Street (in Pgh they are mostly called city steps! Also known as paper streets, look it up if you are feeling nerdy 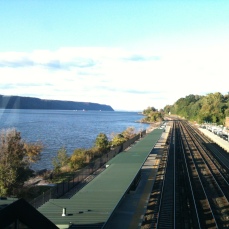 Starting to feel hunger as one would at such times we decided to hit one the few vegan-friendly establishments in the Bronx. Burrito Shop is a special place to ecoRDN because its sister establishment, Burrito Box in Hell’s Kitchen was the first meal ecoRDN had on our initial visit to NYC during Memorial Day weekend in  2012, before moving to Manhattan to start the dietetic internship at Hunter College Fall 2012. Found via Yelp, Burrito Box offered veggie options, massive portions and at about $10 a pop how could you go wrong? Also, that location is close enough to Central Park and other green spaces that you can have yourself a burrito picnic if you fancy! Soon after moving to the Bronx we happed upon Burrito Shop during another such urban hike. And after its discovery became a regular destination following long walks. As I said we were hungry that day and once we got our burritos we destroyed them with our faces before realizing we had forgotten to take pictures! We took pictures of everything but the burritos. Bad bloggers!

After lunch/ dinner (linner?) it was getting kind of dark. We debated and unanimously decided to take our chance walking back home the way we came, through the last vestiges of New York City’s native woodlands, Van Cortlandt Park. As we were entering the trails a man running out of the wooded area warned us of coyote sightings recently up the trail in the direction we were heading. Great, thanks dude! Now we were a little frightened of being attacked by rabid coyotes, but it was too late to turn around. Minutes into the walk and it was suddenly pitch black and we were unable to see to get onto some of the smaller paths that would directly take us home. Hearts pumping, sweat soaked, blood rushing and whence from out of the void came a jogger floating like a ghostly apparition apparently ready to take our souls or some other fantastical nefarious crime, but instead of soul sucking or worse said a simple “hey guys!” We eventually made it home and vowed to never set foot in those or any other woods after dark at least until we forget and do it again.

3. Last work lunch with my whacky co-workers is at…wait for it…Burrito shop! I can finally get that burrito pic and introduce the gang to some new take-out options in the Bronx! 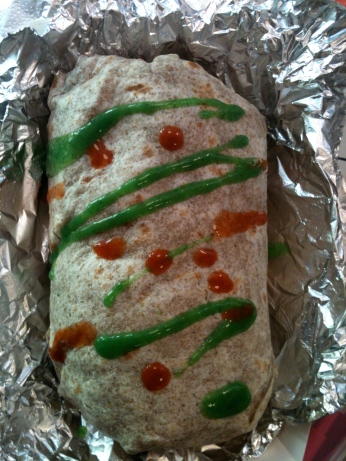 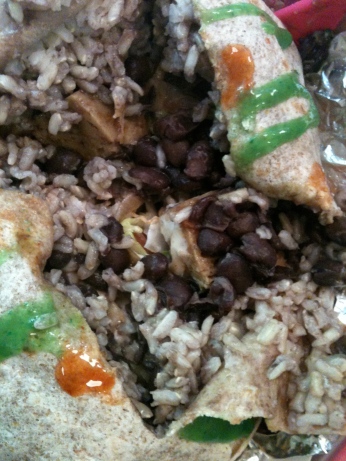 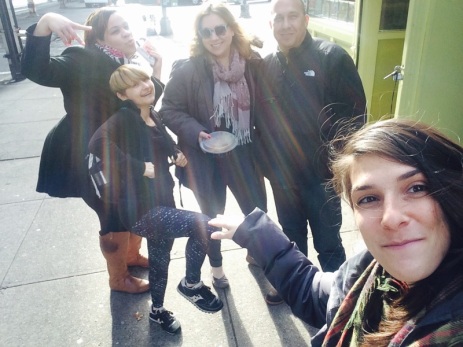 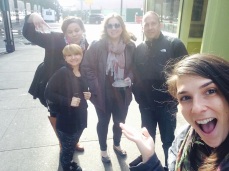 Cutting mine in half to take half home for mañana!

Have you ever eaten at either Burrito Shop or Burrito Box? Did you love it? Let us know in the comments below. Thanks for reading and eat well!!!