The excitement of one’s change of environment often takes a backseat to the actual move itself, because anybody who has ever moved knows moving is the work of grotesque, nefarious forces. In perfectly illustrated irony we at ecoRDN realized we took more gear than was necessary to NYC when we left Pittsburgh in late-August 2012, the unfortunate realization of this happened while packing to move back to Pittsburgh three years later.

All things considered we got our U-Haul loaded much later then we wanted, but left NYC on the eve of New Year’s Eve without hassle via the George Washington Bridge. It was as smooth as you get, loading a 10 foot truck (half full with frivolous items), and moving that truck 7.5 hours in the night. Turnpikes, tolls and fast-moving hi-ways alongside hefty rigs hauling tons in the winter night heading west.

Pittsburgh changed dramatically during our three year Big Apple sojourn, from a bolstered bike infrastructure (big thanks to Bike Pgh and incumbent Mayor Bill Peduto), to a rise in plant-based friendly establishments offering if not all plant-based menus, but a varied selection of good animal-free foods created with love and thought. It was a new era indeed and ecoRDN was excited to revisit our favorite places in the beautiful city of Pittsburgh while discovering the new treasures that awaited.

We got in late (or early?) and decided to rest first and postpone the chore of unpacking the truck until morning. We were happy to finally be home and in our warm bed… well, the ‘bed’ was our queensize mattress and mattress cover sprawled on the living room floor, which we managed to pull out of the truck. When we awoke from a night of splintered slumber we realized the heat wasn’t working. Oh crap. The temperature had yet to really drop this winter season, at that moment it was mild in the 40s and 50s. We were also quite fortunate to have met a plumber (a damn talented plumber) who was right over that morning to help sort us out before the plummeting temps of the coming weekend’s forecast were upon us. On New Year’s Eve breathing steam in a cold, old house we waited with crossed fingers hoping the issue would be resolved, otherwise we would be stuck roughing it over the weekend as New Year’s Eve fell on Friday.

Timing is everything of course and we lucked out. As ecoRDN diligently forges onward working on the writing you are reading right now, swaddled in hoodies and multiple layers, the weather outside hovers slightly above single digits. Weather which would have ultimately destroyed our pipes, and created an enormous (freezing) headache. Heck no to that!

With heat we could commence and after days of heaving, hauling, spending and cleaning ecoRDN decided it was time for a break so we walked 9 miles round trip (of course we did) to the Movie Monday matinee at our favorite movie theater, where two matinee tickets combined make up one matinee ticket in NYC! But the deals don’t stop there, with every ticket purchase the theater give away a complimentary 32oz bag of popcorn (no butter of course). Oh, it was a great movie! Set in a far away place a long time ago, with stars and wars and edge-of-the-seat awesome, that made one member of ecoRDN very, very happy. Afterwards we excitedly planned to have lunch at Randita’s, an all plant-based organic bistro, for our first proper review back in Pittsburgh.

Pgh gave us our first snow of the season! 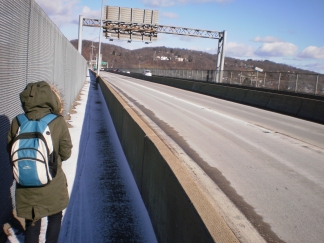 Very cold and windy along the bridge!

But that’s all for now, stay tuned for the next post, a review of Randita’s Organic Vegan Cafe in Aspinall.

Thanks For Reading, and Eat Well!!!