Today is only one week after checking out and we are truly missing our little dorm room at Pitt’s Johnstown campus. A secluded, wooded oasis home to many chipmunks, squirrels and bunny rabbits but more importantly, at least for this blog post, the venue for Vegetarian Summerfest.

Vegetarian Summerfest is an annual conference of the North American Vegetarian Society (NAVS), this year was the 42nd. The national event is open to anyone interested in learning more about vegetarianism, whether it be for health, environmental or animal welfare reasons. And in this case “vegetarianism” is used in the most strict sense, which is actually vegan (no animal products whatsoever). However like I said anyone at any veg level is welcome to the event including omnivores. The conference features lectures, workshops and food demos from well renowned doctors, dietitians, social activists, chefs, athletes, authors, professors, lawyers, etc. It attracts about 500-600 people from all over the country. Attendees are provided with many delicious 100% vegan meals and snacks throughout the 5 day event and a social activity nightly. There are special sessions and activities for children as well as physical activity programs mainly in the early am.

This post will highlight some of ecoRDN‘s favorite activities, lectures and take-aways from the conference this year. However keep in mind that the schedule during Summerfest is jam packed and it was simply not possible for us to attend everything, though we made sure to never skip a meal! If something you loved from the event was left out I assure you it was unintentional. Please feel free to add any of your  thoughts via the comment section below.

The lectures at Vegetarian Summerfest 2016 were both informative and varied. Featuring great life-hack tips like Joann Farb‘s road-tripping vegan style, because why should we starve while everyone else catches up? Or Dr Milton Mills’ fascinating lecture on “The Biology of Disgust”, which illuminated the strange relationship between human carnivores and their meat. Each day offered so many speakers it was difficult to choose who to see. The amount of professionals from around the country were utterly impressive. Renowned MDs and PhDs dropped science behind the absolute necessity of becoming vegan in a meat-happy world going off the rails.

Food demonstrations are always fun, tasty and educational. They are one of our favorite events each year at Summerfest. This year Mary Lawrence a vegan chef and owner of Well on Wheels did a demonstration featuring a vegan Waldorf salad. Michelle Schwegmann from Herbivore Clothing and co-author of “Eat Like You Give a Damn” selected a few recipes from the book to show us. Our favorite was the beet burger! Miyoko Schinner owner of Miyoko’s kitchen delicious artisanal nut products (cheese!), demoed an assortment of recipes from her new book “The Homemade Vegan Pantry: The Art of Making Your Own Staples”. The samples included homemade ketchup, chocolate cake from her very own boxed cake mix and BBQ unribs! 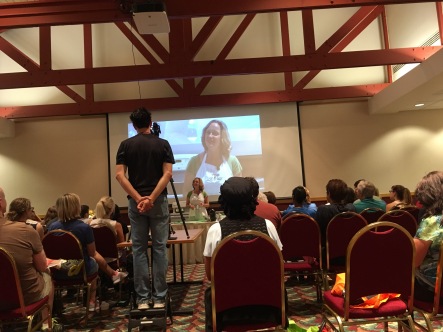 Mary Lawrence, personal chef and owner of Well on Wheels 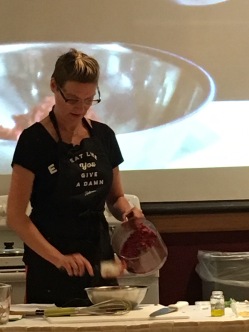 Polenta fries, only kale can save us now salad, savory chickpea pancake and roasted beet burger. 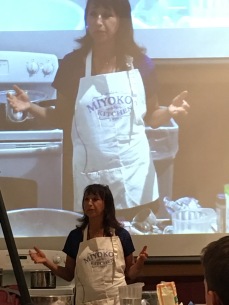 Lara Heimann taught three amazing yoga-stream classes during the five days we spent in Johnstown. Two early morning classes fell on Thursday and Sunday with an afternoon class before lunch on Friday. One hour each and although they were considered beginner-intermediate classes they generated a fair amount of sweat and pain, both welcome. Lara is a great instructor and it was a pleasure taking her classes.

The Living Learning Center also provided 24 hour access to their gym. While not grand with endless rows of pristine equipment, the modest gym did offer a variety of weight and cardio machines that allowed one-half of ecoRDN to work off those three-times-a-day all-you-can-eat vegan buffets!

A plenary session is derived from the Latin root plenarius meaning “full” or “absolute”. It usually refers to a session in a conference which is open to all (or a large number) of the attendant speakers, who may each contribute prepared or ad-hoc material. During the plenary sessions no other events are scheduled so that everyone may come together for the event. The emcees were Maribeth Abrams and the hilarious Vance Lehmkuhl. The plenary presenters included well known vegan advocates like T. Colin Campbell, George Eisman, Hans Diehl, Brenda Davis, Victoria Moran and Dr Michael Greger. There was even a screening of a soon to be released documentary, Called to Rescue . It showcases the incredible work being done on animal sanctuaries for the fortunate farm animals who have been saved from the modern animal agriculture production machine. 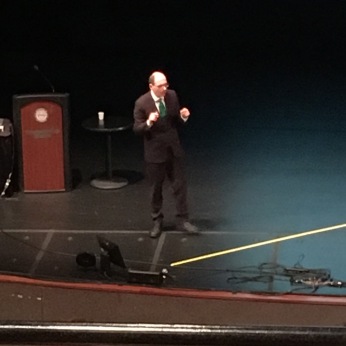 For those night owls that were able to stay up past the plenary sessions ending around 9:30-10pm, there were planned social events nightly from a karaoke party to an all night dance fest! An evening sky watch was also scheduled for those interested in the telescopic views of the moon and visible planets. These groups did not include the likes of ecoRDN, who were generally in bed early to rise for the awesome yoga stream each am.

The meals were prepared under the direction of Chef and author Mark Reinfeld of Vegan Fusion. They included a hot bar, soup, desserts, salad bar, gluten-free bar, oil, salt and sugar free bar and a raw bar. There were always way more options than one could keep up with, though we saw many try! 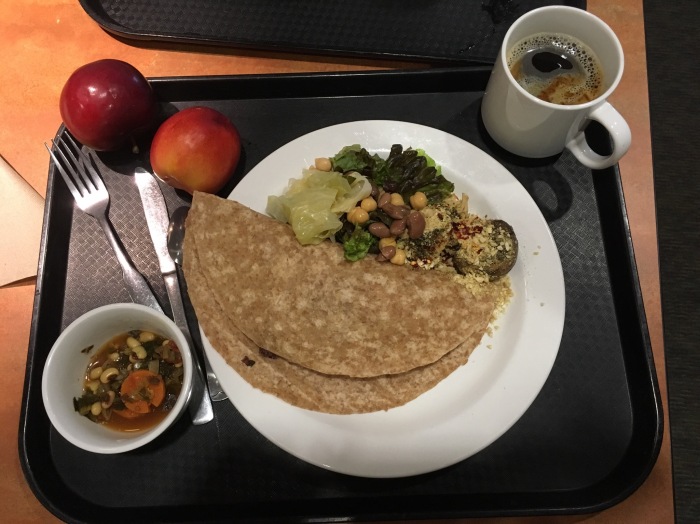 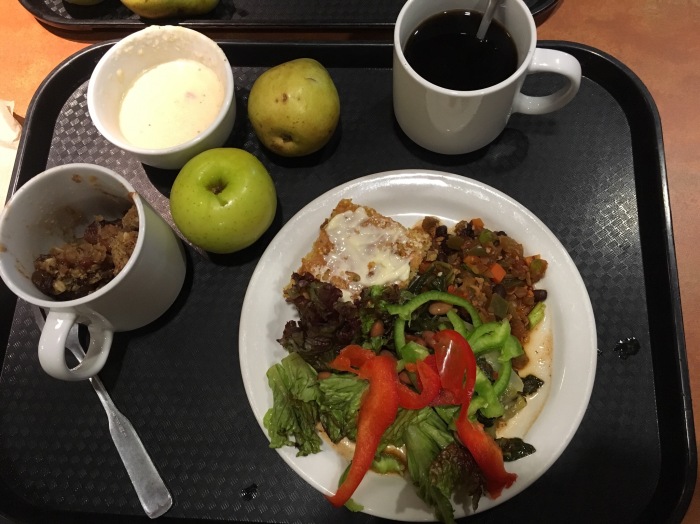 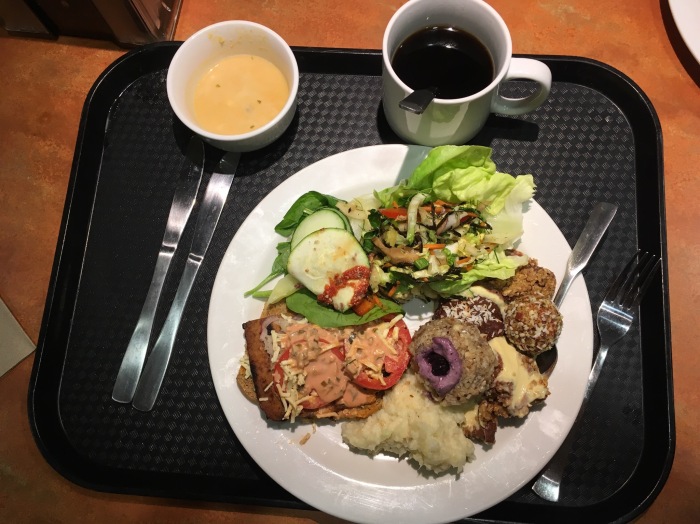 The exhibitors at Vegetarian Summerfest 2016 also had much to offer, from the big NAVS bookstore that contained an invaluable trove of vegan resources, to the shops along the lower level of the Student Union. Vegan Street and Herbivore Clothing Company were two of the many wonderful booths selling slick t-shirts, buttons, books, essential oils, makeup, soaps, bags and all things plant-based.
Dr Michael Greger had a stand set up to promote his brilliantly titled book How Not To Die and happily autographed while he cracked wise and flexed numerous dynamic zingers. All the shop owners were so friendly and open that interaction was a real treat!

Vegetarian Summerfest was an all around amazing experience and we hope to return next year for more fun, inspiration and continuing education! 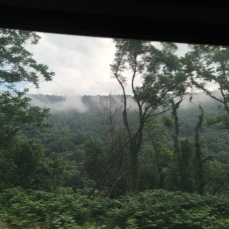 View from the Amtrak on the way to Johnstown from Pittsburgh.

Johnny and our 5-star dorm room.

2 thoughts on “Highlights of Vegetarian Summerfest 2016”